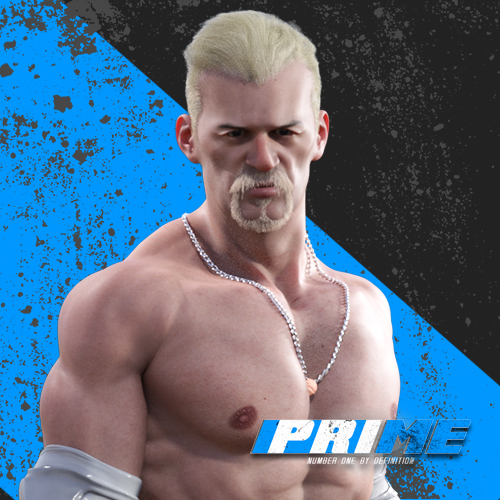 Grew up in the slums of Boston, nurturing a hatred for society that would plant the seeds for his dark objectives later in life. Retired veteran and former deathmatch specialist, PRIME alumni and its 2011 Jewel in the Crown tournament winner.

Mastermind of the Sect of Black Wisdom, a notorious and violent cult that aimed to open the dimensional gates for its patron deities beyond. With the Sect now dissolved and his own body broken in the wake of a brutal life, Bruce mentors his protege and successor, Julian Bathory, in directing MESSIAH International, an organization serving as the new, modern iteration of his former faith.

On the outside the MESSIAH brand is an open and new-age-styled global community seeking to help its members find purpose, spiritual transcendence, and communion with higher powers to fulfill their ultimate potential. None of this is patently untrue, yet there is a darker side concealed beneath the veneer; the black beating heart of the institution is one which hasn't shifted from the Sect's unholy ambitions. MESSIAH lures in the damaged and lost with a palatable message of transformation, slowly injecting its venom, and revealing its true guise only to those who prove their worth and devotion.

Bruce Shanahan is a spite-driven madman, long beyond divine redemption, a seeker of humanity's doom. His in-ring days may be behind him but, unlike his physical form, his cunning is unmarred by time and deterioration. His goal is to advise and shape Bathory in his own image, a weapon greater than Shanahan ever was, and guide his Hungarian apprentice to creating a terrifying juggernaut which will achieve what he never could. Bruce is the venerated shadow king of the growing MESSIAH empire, navigating his cutthroat underworld and moving the pieces to suit his aims.